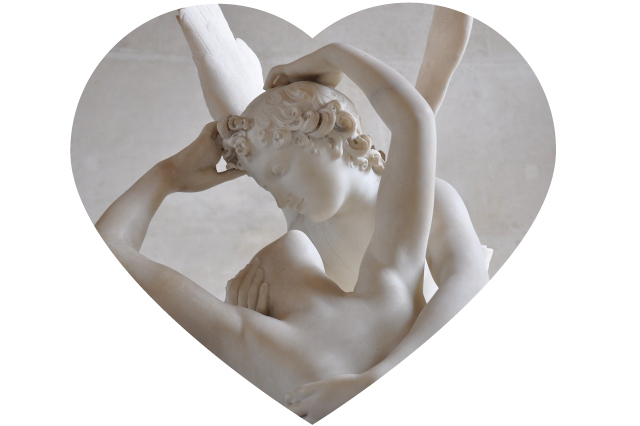 Many of you who’ve worked with me know that my passion is art. I studied art history, I paint, I draw, I carve rocks. The above stone sculpture is one of my favorites. Here’s the mythology behind these two lovely figures of Cupid/Eros and Psyche.  – renée

There were once a king and queen who had three very beautiful daughters. Psyche, the youngest and most beautiful, was treated like a goddess by the local people.

Jealous and infuriated, Venus, goddess of Beauty, ordered her son Cupid to avenge her by making Psyche enamored of the lowest of all human beings. But Cupid fell hopelessly in love with the mortal girl. Psyche’s father, in despair at seeing his daughter unmarried despite her beauty, consulted the oracle of Miletus. The oracle predicted terrible disasters if the girl were not abandoned at once on a rock, where a monster would carry her off.

Alone and trembling on the rock, Psyche suddenly felt the caress of a light breeze: this signaled the coming of Zephyr, the gentle west wind. He bore her away to a marble palace covered with precious stones, which would now be her home.

Each night a mysterious visitor came to Psyche’s room and made love to her. But he forbade her to try to see his face.

Psyche, curious to see her lover’s face, lit her oil lamp one night as he slept and saw that he was none other than the god of Love. But a drop of burning oil suddenly woke him; and feeling betrayed, he fled.

Desperate, Psyche set out in search of her lost love. Venus inflicted terrible ordeals on her, leading her from the Underworld to Olympus. For the last of these ordeals, Venus sent Psyche to Proserpina, goddess of the Underworld, ordering her to bring back a flask she should open under no circumstances. But Psyche was curious, and opened the flask. Inhaling the vapors, she fell into a deathly sleep. Cupid revived her by touching her with his arrow. Moved by such devotion, the gods finally granted Cupid Psyche’s hand. They gave her nectar and ambrosia, and this made her immortal. They then consecrated her goddess of the Soul.